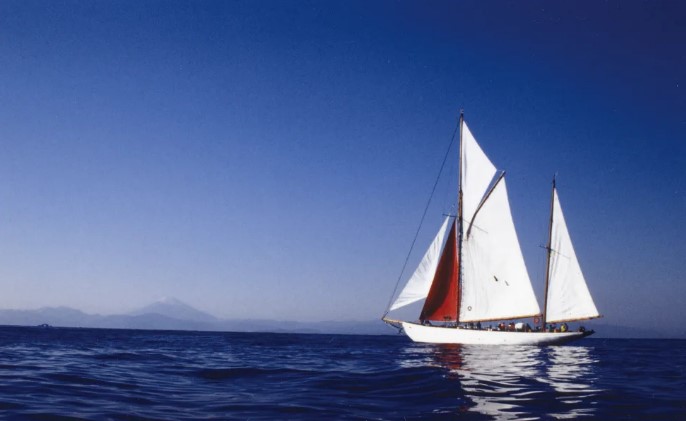 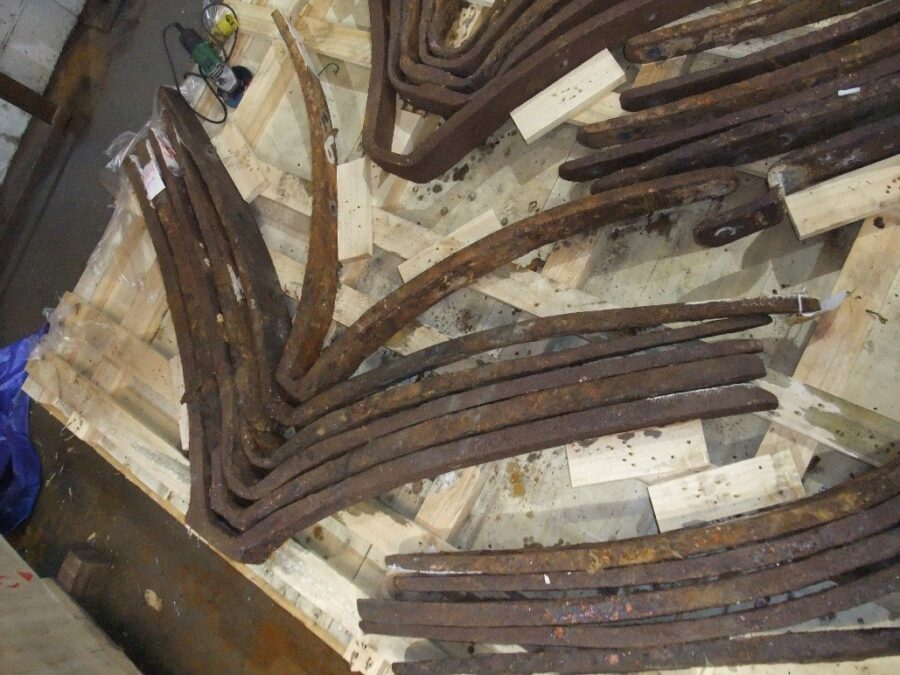 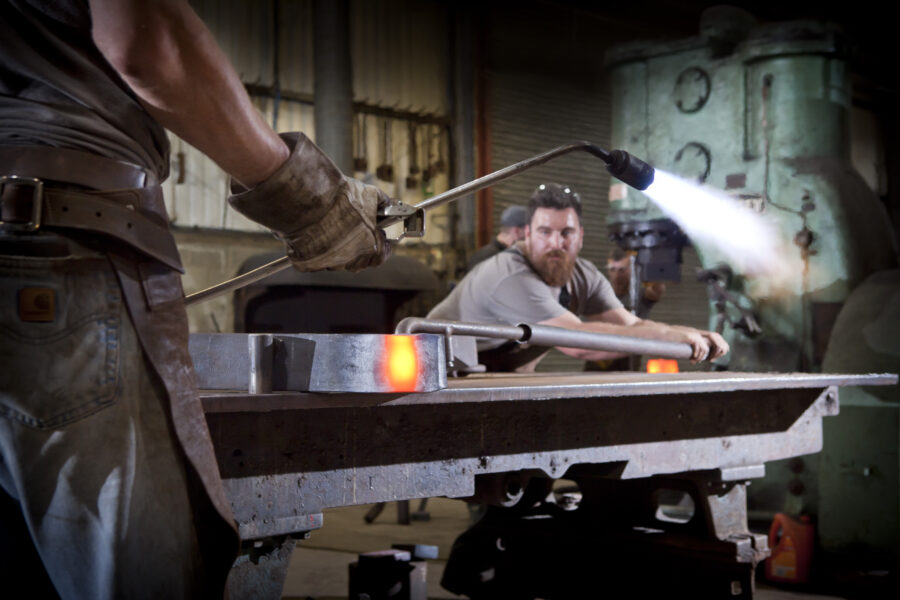 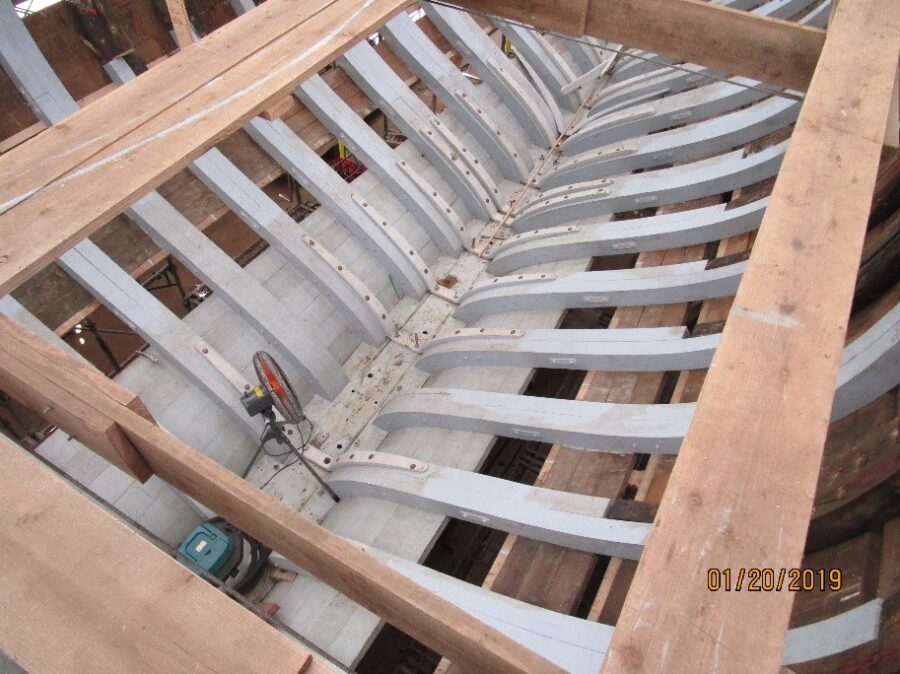 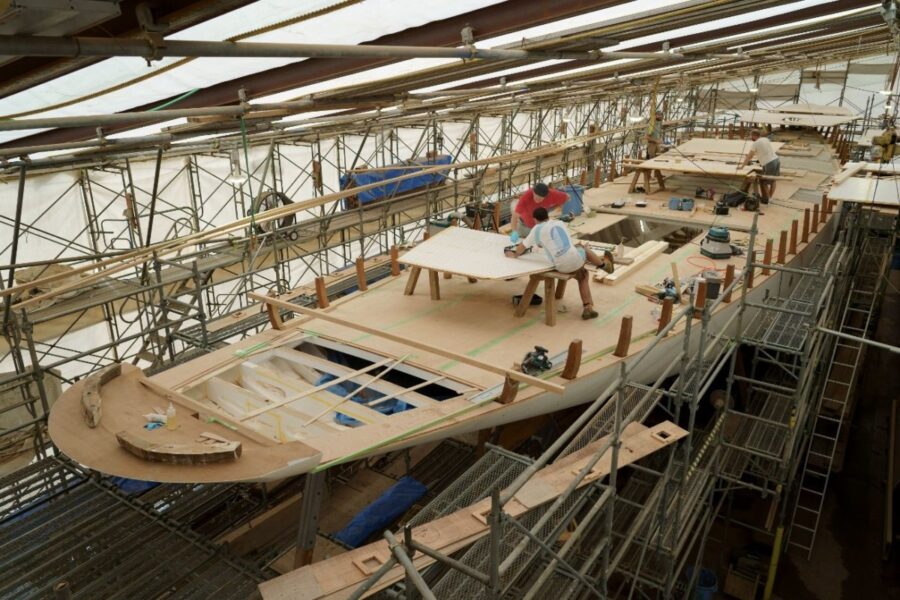 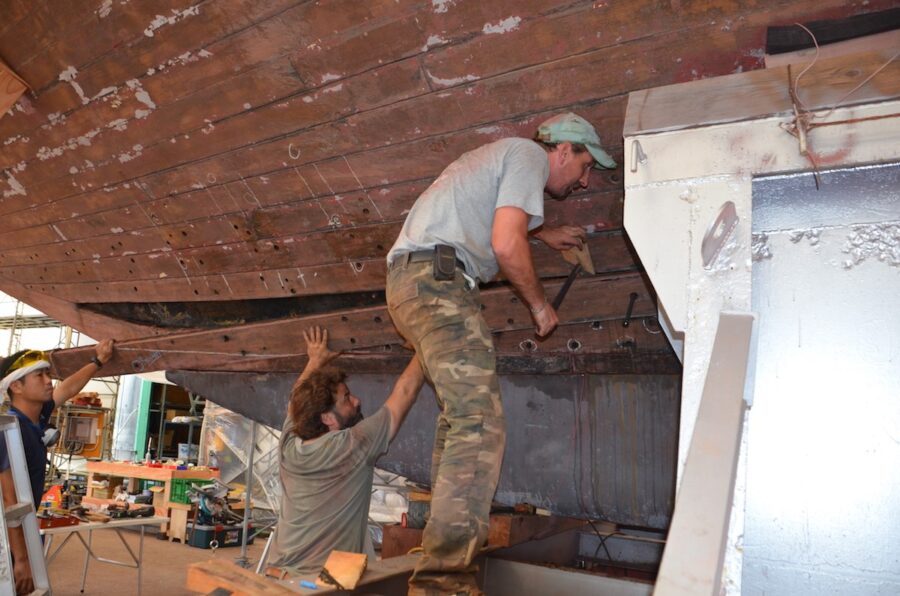 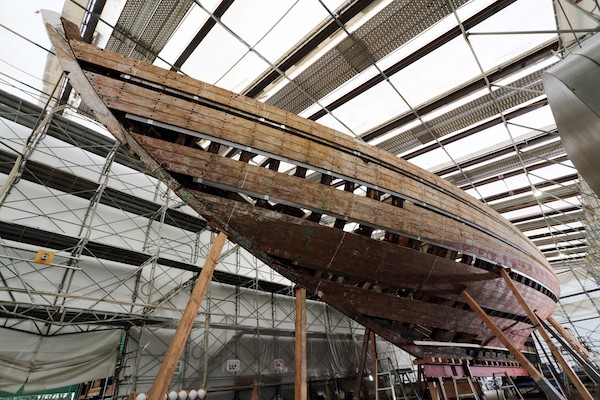 A customer in Japan asked us to Manufacture the genuine heritage wrought iron ‘gull-wing’ floors and chain plates.

The new ‘gull-wing’ tapered floors were formed under the power hammer from 4” x 1-1/2”” billet which was hot rolled using 4″ square section mooring chain as the starting billet. The original floors were used as templates to ensure the angles were correct as the restoration and installation was taking place in Japan. We were also asked to make replacement pre-1941 pattern, 1-1/2” BSW naval brass keel bolts manufactured up to 2m long. The completed elements were then shipped to Japan for their team to install.

History – summary
Cynara is a 96ft (29m) gaff-rigged ketch, design by Charles E Nicholson and built by Camper & Nicholsons in 1927. Cynara has been based in Miura, Japan, since the 1970’s where she has been used only very occasionally by her owners, a Japanese family-based company called Riviera Holdings.

Christened Gwendolen, Cynara has also been called Easy Going during a colourful career. She was purchased just prior to her launch by the Danish Graae family who were among the founders of the Regates Royales in Cannes. William Compton, the sixth Marquess of Northampton, owned her for 25 years from 1933 before the famous British racing driver, Duncan Hamilton, bought her in 1965 and kept her in the Mediterranean. Legend has it that Compton’s close friend, Winston Churchill, nearly set her on fire. It was during this time Cynara was chartered for the comedy crime film Drop Dead Darling, starring Tony Curtis and Zsa Zsa Gabor. Having raced in the Caribbean in the late 1960s and early 1970s, Cynara left Europe in 1973 for Japan. Since her arrival she has been maintained in her original state and, very unusually, her layout had not been substantially altered.

The restoration plan was to keep as much of the original boat as possible and it is estimated that around 70% of the yacht has been preserved. After initially presuming they’d need to ship the boat back to Europe for restoration, the owners decided to undertake the project in Japan, opting to employ classic yacht expertise and specialists from Europe to work alongside, and help train, local carpenters. Cynara was hauled from Sagami Bay, south of Tokyo, disassembled and put under cover in 2017. Feargus Bryan was brought in to project manage the rebuild. With the frames set up, the team refastened and repaired the planking, deck beams and cabin soles, before laying a new deck. The interior was restored off site, with most joinery work retained. New masts were sourced from Noble Spars in Bristol, while Ratsey & Lapthorn, the Cowes based loft that sewed the original sails, has made a new set of sails.

History – taken from cynara website
Cynara is one of the last great pre-war cruising yachts to be restored. She was built in 1927, in an age when British shipyards were at the pinnacle of yacht building and design, and she is a living showcase of that period’s traditional skills and creativity. A testimony to her builders, and a superb piece of craftsmanship that has lasted over 90years, her restoration is richly deserved.
Cynara is a classic yacht, a classification given to yachts that were built over 50 years ago. Classic yachts are important because they represent an era in history when yachts were built to last for many years and were maintained in true Bristol fashion – that is, conforming to the highest standards of seamanship. There is an elegance in design and construction that is very evident in every aspect of the yacht’s structure, and the workmanship is perfect from the largest piece of timber down to the smallest nail. The craftsmen were clearly proud of their skills even in areas that were never visible when completed. Cynara was designed as an auxiliary ketch by Charles Nicholson, one of the most famous yacht designers of the first half of the twentieth century. Nicholson designed both racing and cruising boats, and Cynara was designed to be a fast cruising yacht with a relatively shoal draft that could sail into shallow estuaries and anchor close to the coastline.

The commitment and attention to detail shown by those shipbuilders of the past has been rewarded over the past 30 years, as huge efforts have been made by owners to rescue, preserve, and restore these yachts, both to appreciate and enjoy their beauty and to make sure that future generations have the opportunity to understand them.
Charles Nicholson had a reputation for designing safe and seaworthy boats that could sail quickly and efficiently, and despite her shallow draft, she has all the design elements of his most seaworthy creations. What we know of her history is that she was always fast and a great boat to sail on ocean voyages, even in the harshest weather conditions.
The splendid interior by the Camper & Nicholsons shipyard was designed for use in a bygone era. Before air-conditioning, yachtsmen would spend very little time in their cabins below, instead preferring to live on deck underneath large awnings. The designers understood the needs of the yachtsmen and the relationship between sun, wind and shade, and new how to use the elements effectively to maximise their comfort. There are lessons to be learned today from close inspection into how parts of the yacht were designed, and it is only by understanding the thought behind their decisions that we are able to see the intelligence in their design concepts.